Eleven-year-old Mackjourney goes to a secret school in Cameroon.

When his family recently fled a separatist rebellion in the country’s English-speaking regions, they thought they had found a place where he could go to school in safety.

But that has turned out not to be the case as the school he attends in Douala, the biggest city in Cameroon, is at risk of closure because it is deemed illegal by the authorities.

Such illegal schools are mushrooming in Douala, where the majority of people are French-speaking.

Most schools in the Anglophone regions of North-West, including its capital Bamenda, and South-West have been shut down over the last three years, leaving more than 600,000 children out of school.

“I left Bamenda because there was a war. They were killing people and they were shooting guns,” Mackjourney told the BBC.

Those schools that did remain open were at risk of attack from separatist fighters.

“We would sit in class and bullets would be raining on the roof. It was scary,” he said.

Some enterprising people in Douala have stepped in to provide them with an education – at a price.

Mackjourney walks 2km (a little more than a mile) every morning through a narrow, winding pathway in a marshy area to his school, a wood structure with no windows.

From inside their classroom they can see the tall grass on all sides.

The location has been chosen so that it is hard for the authorities to find.

This is the second private school he has attended in Douala – the first was shut down by the government as it had not been approved.

The authorities say schools must have a playground, a library, and classrooms to be officially registered.

But the proprietors of these schools are willing to flout the regulations as there is money to be made from parents desperate to give their children an education.

With annual fees as much as $200 (£150), almost four times the monthly national minimum wage, they can cash in on the chaos created by the conflict.

“Just to pay the registration fee was not really easy for us,” said Mackjourney’s mother.

Like other parents, she says the options for those who have fled the conflict are limited as it is increasingly difficult to get a place in an approved school. 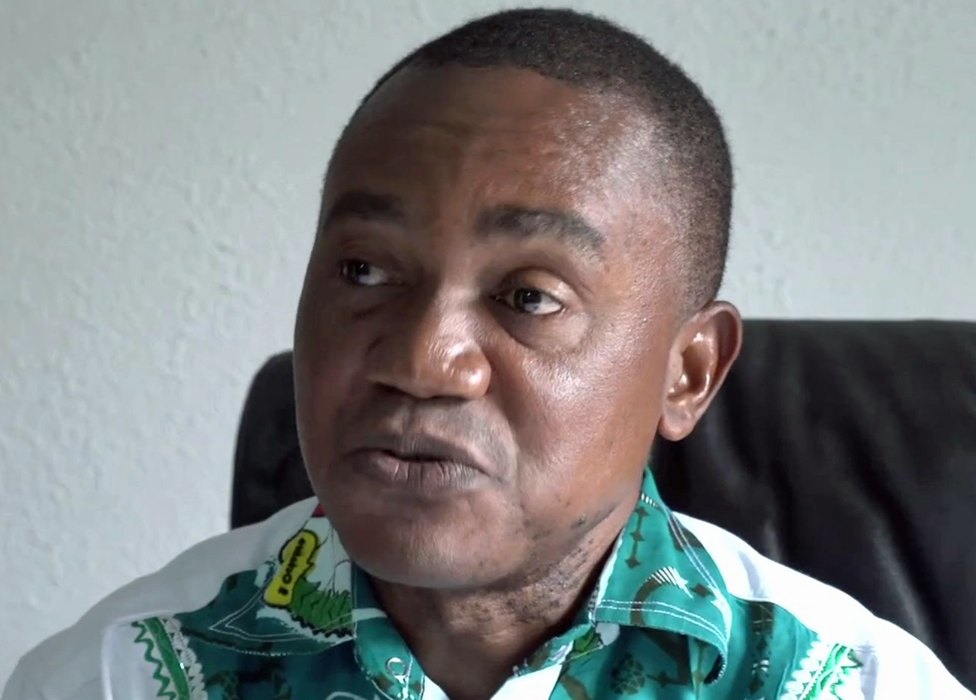 So far the authorities have shut down more than 260 schools since the start of the school year in September and critics say they are not offering alternatives.

An official from the education department in Douala’s Wouri suburb, Sylvestre Fils Moukalla, said the government had taken steps to accommodate the fleeing students.

“These PTAs mobilised enormous resources to build new classrooms and as a result the problem of the influx has been resolved. In Wouri for instance, all the children have found a classroom,” he said.

But the reality is that many of the available classrooms are already overcrowded.

Some parents too like the fact that the private schools teach their pupils in English – not French.

This is the root cause of the conflict in the Anglophone regions, which are home to about 20% of Cameroon’s nearly 25 million people.

The problems began in 2016 following the government’s decision to increase the use of French in schools and courts in the mainly English-speaking regions.

A key component of the separatist struggle has been a school boycott, enforced through the kidnapping of students and teachers who flout the order.

In February, 176 people, mostly students, were kidnapped before being released two days later.

Some of those who have fled to Francophone areas, including Claude Ngwa, are turning to home schooling.

Why Cameroon is still divided along colonial lines:

“I decided to get a private teacher to see how we can manage to educate these children at home,” said Mr Ngwa, a bricklayer and father of seven.

He believes it is cheaper to pay one teacher than pay individual school fees for his children.

“It’s too difficult for us. We are suffering. I am really ashamed that these children should stay in the house.”

Anyambod Emmanuel Anya, founder of the Protestant University of Central Africa based in Cameroon’s capital, Yaoundé, warns of a bleak future if no solution is found fast.

“That is the price we are paying as a result of this conflict,” he said.

'We only just found him'

'It was hard to breathe': China flood terror as subway submerged