Two weeks ago police in Glasgow issued an unusual lost property appeal. A collection of old photos, perhaps treasured family memorabilia, had been found at a department store. Solving the mystery revealed an unexpected link to one of the darkest moments in the history of the BBC.

There were a few clues. A sepia-tinted wedding photo, a group of smiling guests, women in wide-brimmed hats and a young boy in a kilt. It was taken by the “The Knightsbridge Photographic Bureau 245, Knightsbridge, S.W.7”.

On the back were handwritten notes: “Effie’s wedding (Mother’s sister who died in London bombing 1941)” as well as “Uncle Harry” and “Aunt Annie”.

Four smaller photos with the words “Millport 1952” written on the back showed groups of children called Moira, Grace, Helen, Rosemary, Janice and John.

They had been found in Glasgow’s John Lewis store last year and handed in to police. With no-one coming forward to claim them and thinking they may have sentimental value, officers posted them on social media.

Newspapers and websites picked up the story and soon a team of amateur sleuths and genealogists were working on the puzzle. It wasn’t long before the mystery began to unravel.

Millport is a seaside town on the small island of Cumbrae, just off Scotland’s west coast.

The first breakthrough came just hours after the story appeared on the BBC website. One of the Millport children got in touch.

Grace Beagrie, now in her 70s, was nine years old and named Grace Little when those pictures were taken near her home at 10 Guildford Street, just in front of the beach.

The other children in the snaps were her cousin Rosemary Houston, visiting from the mainland, local friends Moira Stewart, Janice Blair – as well as John and Helen Steven, who were staying with their grandparents in the flat below Grace’s home.

“We just bathed in the sea every day,” Grace recalled.

“Our parents told us if it was raining the water would feel warmer – and we believed them.

“We played quite a lot in the back yard and roamed the hills.”

Grace has no memory of who took the photos but suggested it may have been a street photographer who worked out of the nearby newsagent, taking snaps and selling them to holidaymakers.

As for the older wedding photograph, the names rang no bells – but she suspected they might be connected to the Steven family.

Her hunch was right.

A number of people posted on social media suggesting a possible location for the wedding photograph.

St Columba’s, a Church of Scotland church in London’s Pont Street, had a similar-looking entrance before it was destroyed by a incendiary bombs in 1941.

Others pointed out that Effie was short for Euphemia – a distinctive forename which coupled with the information that she died in the Blitz was a strong lead.

Amateur genealogist Sally Howel searched the listings of WW2 civilian deaths and emailed us to suggest a likely candidate.

Euphemia Shearer died in October 1940 – a year before the date written on the photograph – but that could have been a simple mistake.

Her maiden name was Steven and she was born in Glasgow’s Dennistoun area but lived in London when she died at the age of 29.

According to the records, in 1939 she married another Scot, George Ross Shearer, in Chelsea – not far from the Knightsbridge Photographic Bureau.

With names for the couple, it was possible to nail down the location and precise date.

St Columba’s Church was rebuilt in the 1950s and the church office confirmed the wedding took place there on Monday 17 July – seven weeks before Britain and Germany found themselves at war.

Sally had another piece of information that added an ironic twist to the story – Euphemia Shearer worked for the BBC.

In the autumn of 1940 London was facing the full force of the Blitz.

Just after 8pm on 15 October a 500lb bomb smashed into the seventh floor of the BBC’s headquarters at Broadcasting House, destroying the telephone switchboard and coming to rest two floors below in the music library – but it didn’t explode.

The BBC had its own firemen in the building who soon got the flames under control.

But the bomb had a delayed action fuse. As staff made an attempt to move it, it detonated.

At two minutes past nine, newsreader Bruce Belfrage was in the basement reading the hourly bulletin when the building shook and the sound of the blast was broadcast live to the nation.

Showered with falling plaster, Belfrage famously paused and coughed – before calmly resuming his reading of the news.

Later he would learn that seven of his BBC colleagues had lost their lives.

The BBC’s written archive department could find no record of a Euphemia Shearer as a staff member – she may have recently joined the corporation – but a memo confirmed that one of the victims was a “Mrs Ross Shearer” who worked for BBC Monitoring, the department that monitors news reports from around the world.

It’s not recorded what she did – though the register of all British civilians compiled the previous year describes her as a shorthand typist and clerk.

The circumstantial evidence that “Effie” was Euphemia Shearer was strong, but another amateur genealogist, Sue Wright, put the matter beyond doubt.

From her computer in Kent, she was able to draw up a family tree for Euphemia and the connection between the photographs became clearer.

Euphemia’s elder brother was Henry Robertson Steven – they shared the same unusual middle name – and Henry was father of the two Steven children pictured in Millport in the 1950s.

He was probably the “Uncle Harry” mentioned on the wedding photo, while Euphemia’s elder sister was called Annie – “Aunt Annie”.

It was now possible to deduce where the person who annotated the photos fitted into the family tree.

They couldn’t be John or Helen because they referred to Henry as “Uncle Harry” rather than father. Aunt Annie’s children could similarly be ruled out.

Their description of Effie as “mother’s sister” suggests the writer was a child of one of two other sisters.

Solving the last part of the puzzle proved the most challenging but, thanks to Sue’s dogged determination, the mystery of the lost photos was finally cleared up when we traced some of Effie’s living relatives.

Last year Helen Orr – one of the “Steven children” pictured in Millport – met up in Glasgow with Sheena MacIntyre, her cousin who had emigrated to Canada more than 50 years ago.

As the women chatted over a cup of coffee in the city’s John Lewis store, Helen gave Sheena the old wedding photo.

“I explained to her who was in it,” said Helen. “My father was there and Sheena’s parents – and she made notes on the back of the picture.”

It appears the photo on the steps of St Columba’s features many of the wedding couple’s Scottish relatives – but the bride and groom were absent. 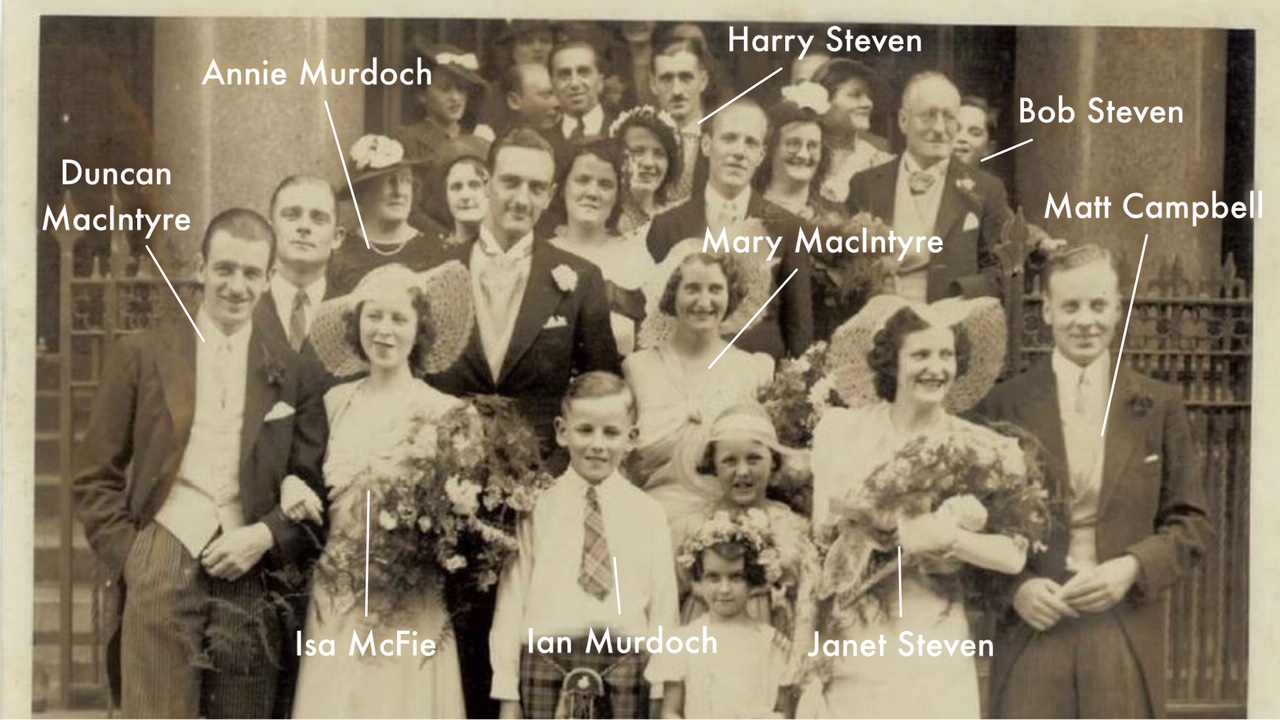 The other photographs from Millport were for Sheena to pass on to another family member – but somehow in the excitement of the reunion, they were left behind. They each assumed the other cousin had them, so didn’t realise they were lost.

“I don’t really know how it happened,” said Sheena, speaking from Vancouver. “You know how it is when you meet up with someone you haven’t seen for a long time. It’s just chat, chat, chat.”

Neither Helen nor Sheena were born when their Aunt Effie died in London in 1940 – little more than a year into her marriage – but Helen recalls how it affected her father.

“People from his generation didn’t talk much about the war but I remember how he was very sad about it. He was always very quiet on Remembrance Day,” she said.

The family’s details have now been passed to Police Scotland and soon the photos will be back where they belong.

All images are subject to copyright.